Numerical simulations aim to represent the real-world dynamics of a physical system with the help of a computer. Despite being an incredibly complex machine, a computer is, at its core, an ultra-fast calculator with increasing but finite capacity. In contrast, real-world systems are infinite: whatever level of zooming you look at, one always finds that space is continuous. The mathematical modeling alleviates this issue in its final steps by considering only slices of space (and time). The number of slices chosen or the resolution is then directly related to the accuracy of the model. Unfortunately, the resolution can not be arbitrarily high as it will increase the computational effort and ultimately exceed the capacity of the computer. It may be desirable to have a fine resolution where a phenomenon is of interest and a coarse resolution elsewhere to decrease the cost of the simulation. The computational domain is then composed of multiple subdomains of different resolutions.

The main difficulty is how correctly exchange information between these subdomains and reconstruct missing data. An inadequate transition between two resolutions in computational fluid dynamics simulations results in the emission of a pressure wave or equivalently a spurious (non-physical) acoustic noise.

The white lines in the previous image denote the grid transitions. A small patch of a finer resolution is embedded in a two-dimensional domain. Initially at its center, a vortex corresponding to a depression of $7000$Pa moves from the left to the right. Multiple concentric pressure waves caused by the initial conditions are visible. In this image, the vortex is approximately crossing the transition between two resolutions (from fine to coarse). The circular shape of the vortex is negligibly affected by the grid transition. Nonetheless, two pressure-wave of magnitude $\pm0.7$Pa are emitted behind the vortex, which is equivalent to an error of $0.01\%$ relative to the vortex magnitude. Reducing this error is of paramount importance for aero-acoustic simulations to obtain accurate results.

The author acknowledges the funding of the French DGAC under the project OMEGA3. My work carried out during my post-doc at LMFA was part of a scientific collaboration including CS-group, Renault, Airbus, École Centrale de Lyon, CNRS, and Aix-Marseille University. 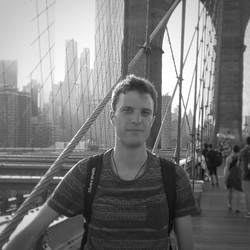